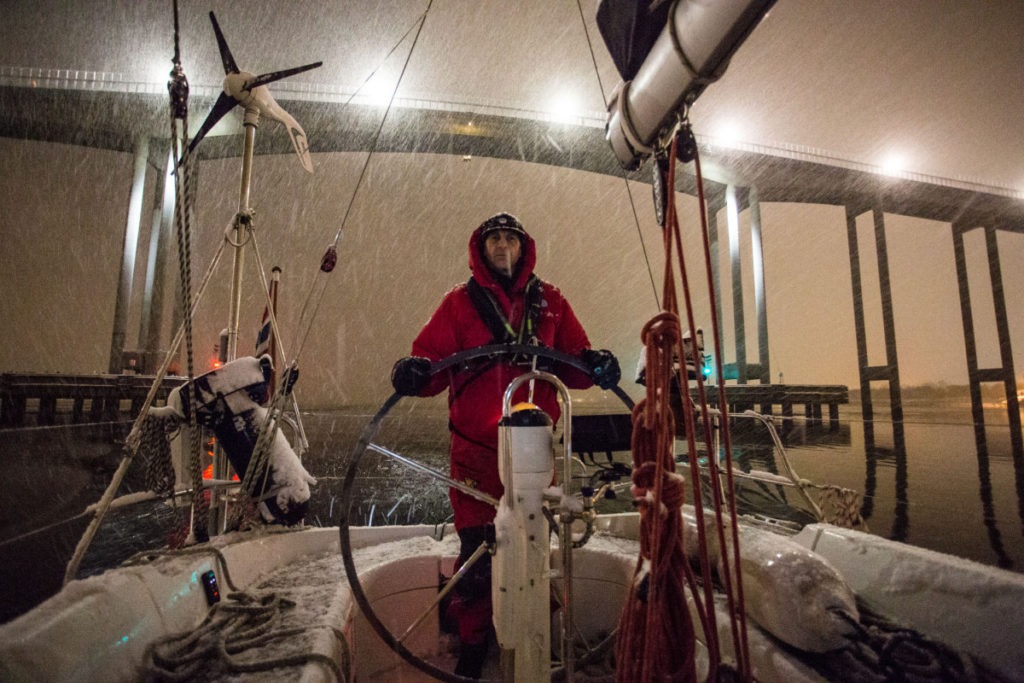 Barba defied temperatures of -20 Celsius and made it to Tromsø on January 11th, early in the morning, thus providing evidence that sailing the Norwegian coast during winter time is not such a big deal. Despite the couple of gales we experienced, the wind was blowing mostly offshore during the transit and the sea was mostly flat. The main challenge was nighttime navigation, with the days growing progressively shorter as we sailed North. We saw the sun for the last time at the island of Tomma. By now the sun has supposedly returned from the longest days of winter, but we have so far been denied seeing it due to overcast weather. We made a few stops on the way north from Stavanger to stretch our legs and enjoy the beauty of the rugged Norwegian coastline up close. We only spent two nights in port, however, with an additional two daytime stops. 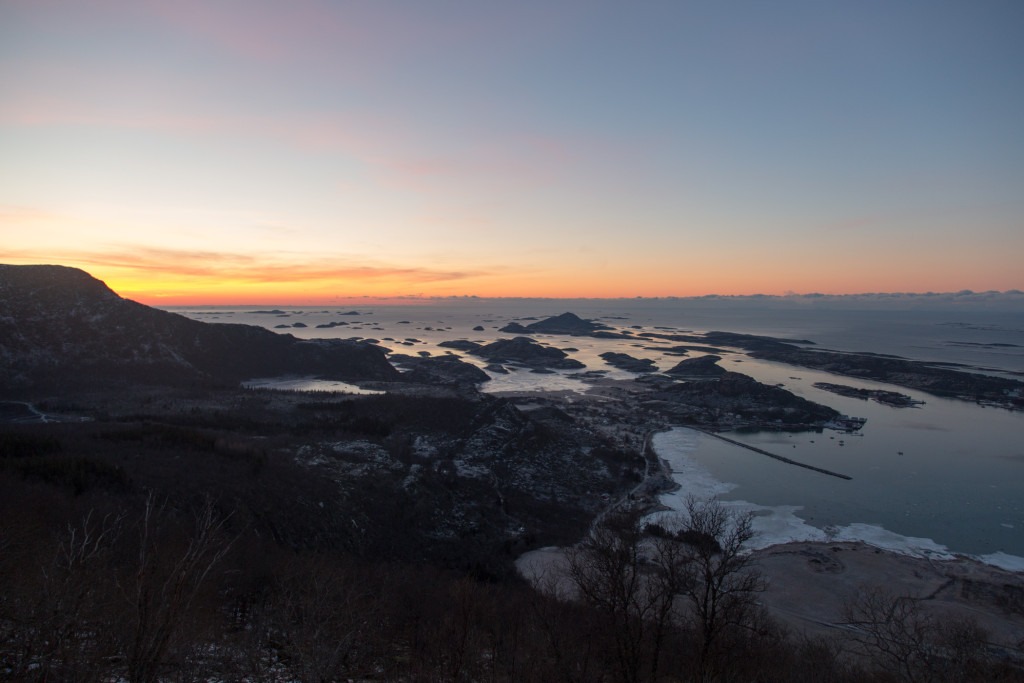 From a stopover in Steigen, south of Lofoten.

Jaap and Malin can vouch for Barba as a reliable means of transport. They made it to Tromsø two days ahead of schedule and are now back to their studies there. With a background as a professional racer and equally impressive skills in the galley, Jaap truly delivered on the transit. Malin, with no previous sailing experience, was enrolled in the nighttime watch system after four days. She navigated Barba on her own with great proficiency, and landlubber is no longer a fitting description for her. We owe them both a big thank you for a safe and pleasant sail up the coast. 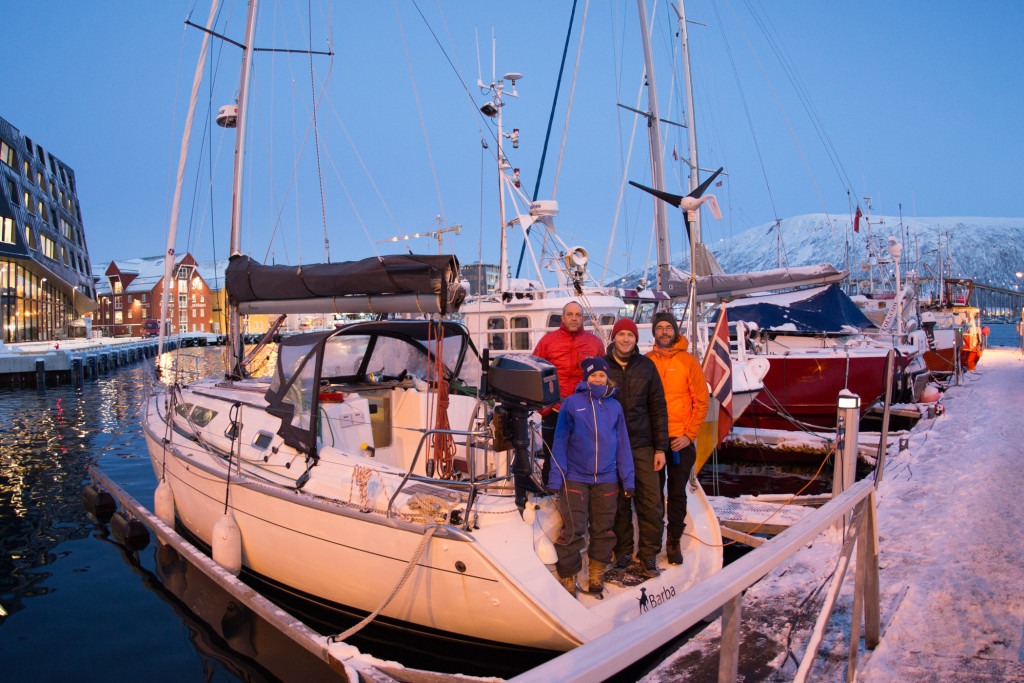 Safe and sound in Tromsø. From the left. Rasmus, Malin, Andreas and Jaap.

We had busy days in Tromsø, preparing for the next leg to the island of Senja on the west coast of Northern Norway. On Thursday, January 14th, Ramus and I were joined by Terry Ward, who flew in from Florida via a stopover in France for provisioning wine and food. Terry has spent 100 days on Barba this summer with the circumnavigation of Svalbard, and will be with us for about 10 days this time. Later in the evening we picked up Mr. Tony Wu at the airport, who flew in straight from Japan. Tony is new to Barba, but not new to the ocean. He is a famed professional underwater photographer who has dedicated his life to documenting whales. 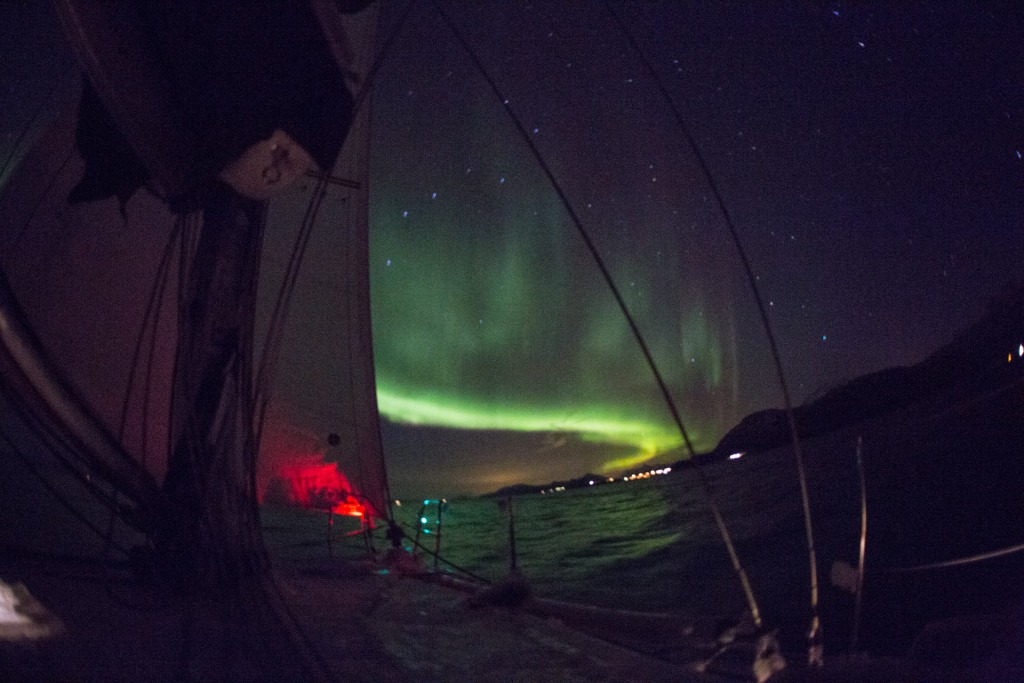 With Friday night party time descending in Tromsø, Barba made her escape after a lovely send-off meal at Jaap´s, shared between the former crew and the new one. After 10 hours of transit we made it to Hamn in Senja, which will be our base of operations for the next 3 weeks. Our goal here is to spend some time with the orcas, humpbacks and fin whales congregating in the area. 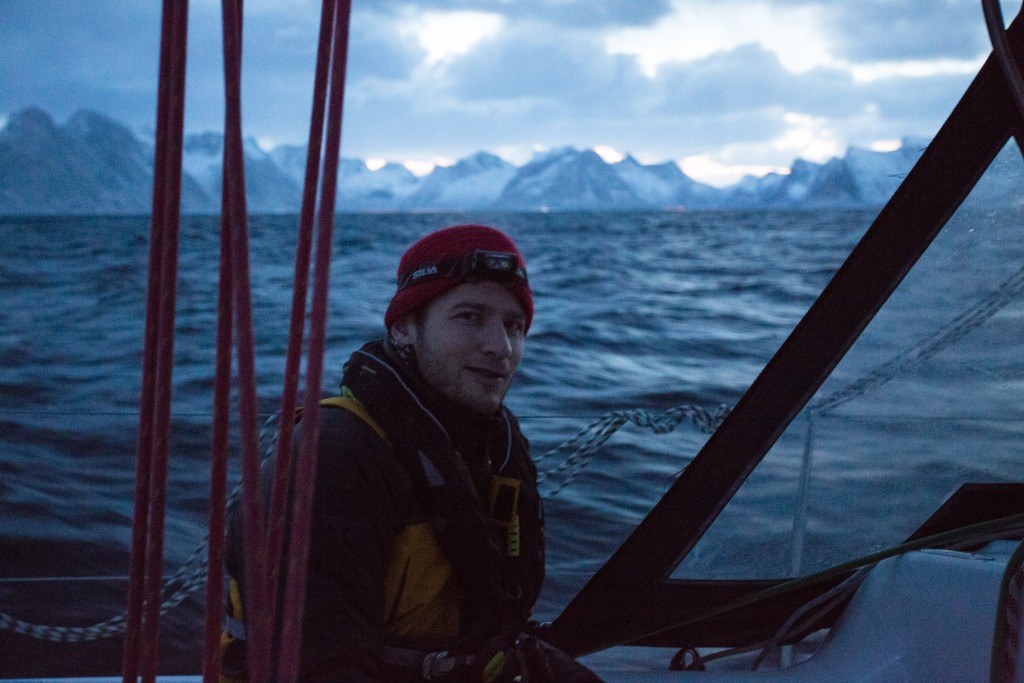 Andreas on watch during the approach to Hamn in Senja. Photo by Rasmus.

Tomorrow morning, we sail out. Reports indicate large gatherings of whales in the area. We are as ready as we can be! 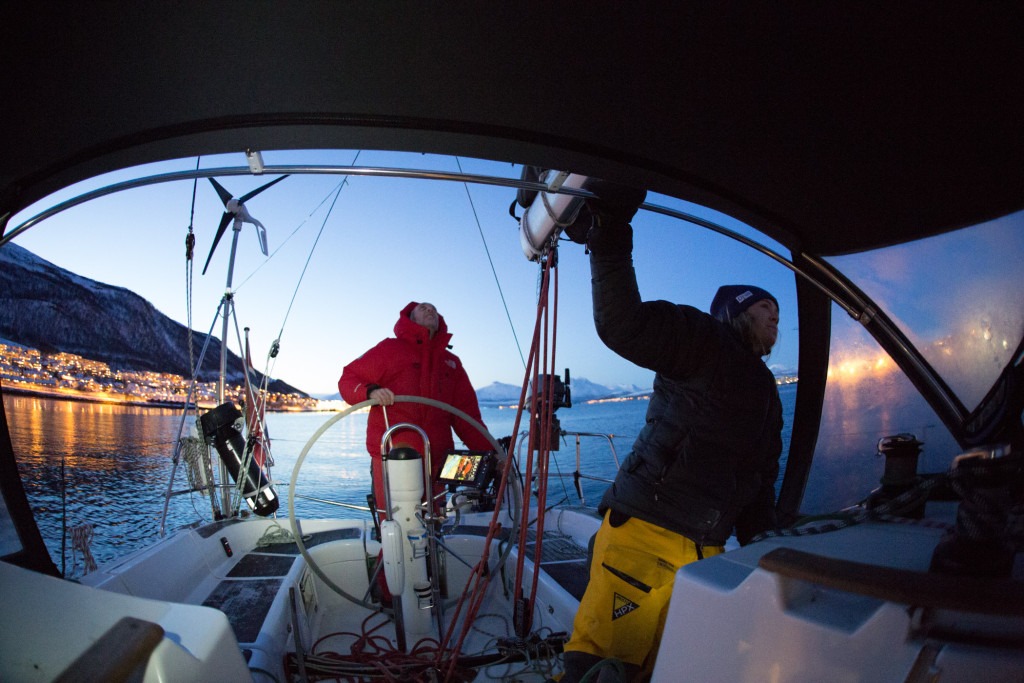 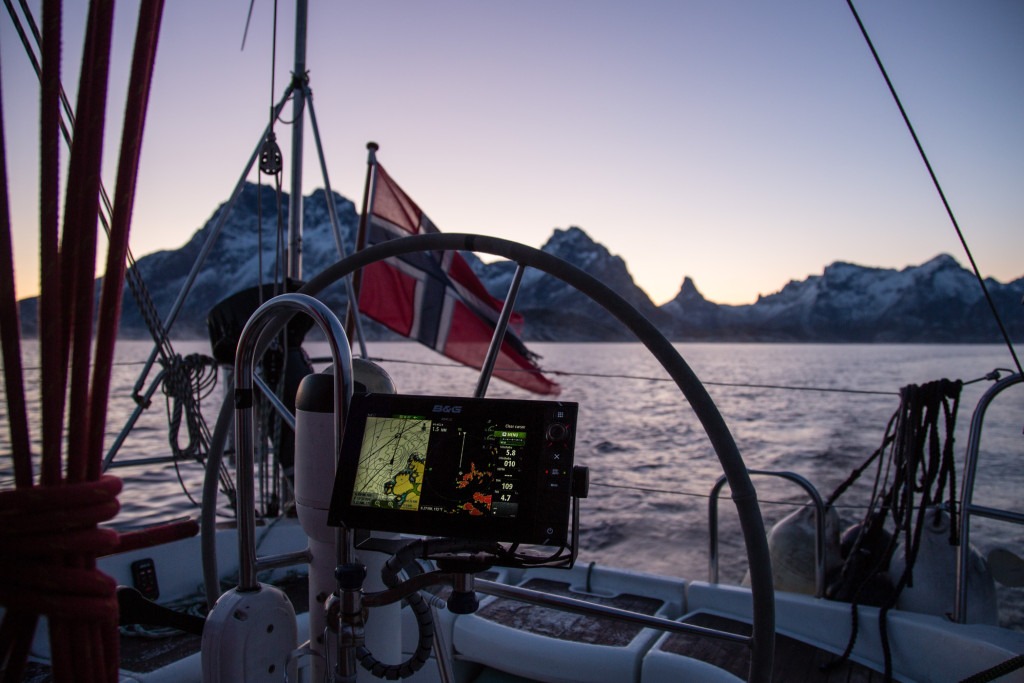 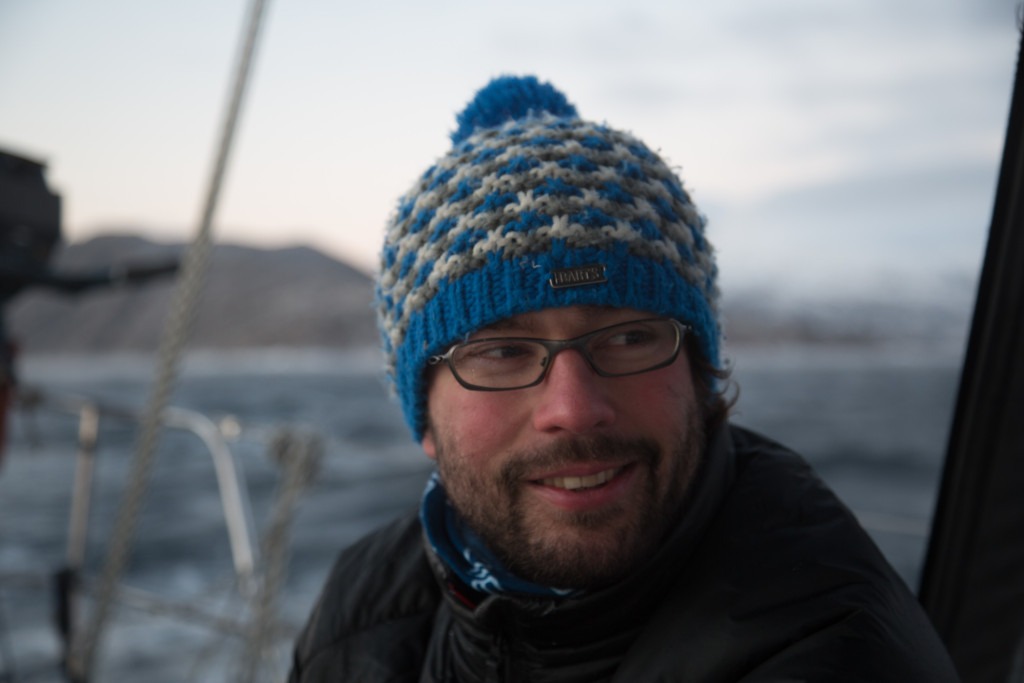 Jaap on watch, not longing to get back to the office. 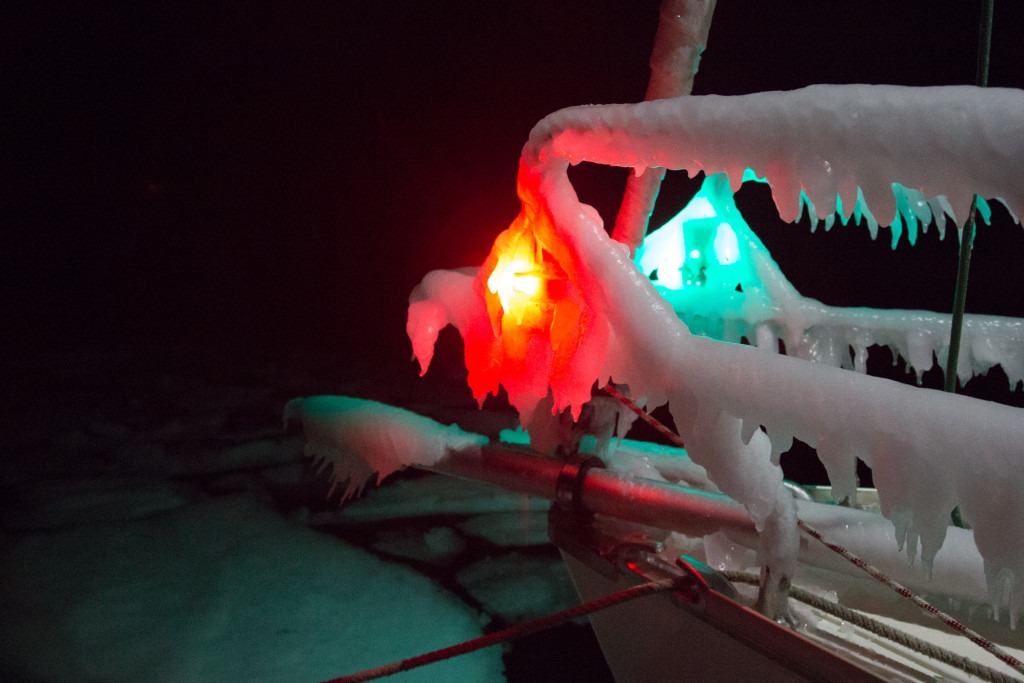 The result of seaspray in -20 celsius. Navigation lights by Lopolight. 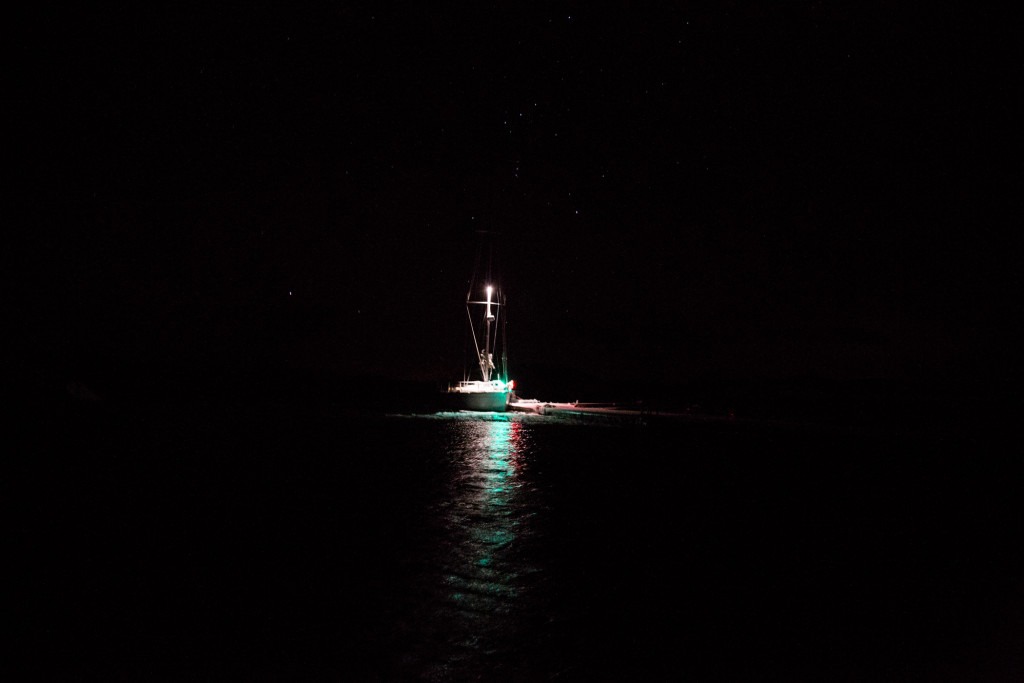 In port in in Tomma.

Great pictures, again.
Looking forward to being there… in summer!

Thank you JF! Going there in the summer also sounds like a good idea 🙂 I would highly recommend the Marina at Hamn. A.

Following you closely from the office with window open!!

Careful so you don´t catch a cold Ulf! 🙂 Andreas

As I head out in +41 Celsius I shall be thinking of the icicles on your bow!

I’m not quite sure about your sanity, but I’d love to be out there with you!

Tony, good to see that you are still following us! We question our sanity every day we wake up, and showel snow off the boat. The pinnacle of misery is slipping into the wetsuit. Once you have eye contact with an orca it´s all worth it though 🙂 Andreas

With the grand opening of the Munch museum @munchm

A moment of great anticipation and importance for

The Jan Mayen Expedition is complete! Despite str

Look carefully at this photo. At first glance th

Sailing through the remote waters off Svalbard, ne

“Eight hours after departure, we encountered a g